Skip to content
Once again Marlin Sub-Aqua Club was in Pembrokeshire for three days diving, although this time the plan went a little awry...

It’s Thursday evening and Steve, Mike C, Jamie, Martin, Ellie and I meet at Upper Neestons bunkhouse just outside of Milford Haven. We head out to Milford marina where there are a few places to eat, and also make use of the large Tesco in town for supplies.

Next morning is diving! Martin’s Haven at 8 o’clock is quiet, a good spot for shore diving. None of us fancied getting up for high water at 05.01 but it’s not really necessary as the bay is 30 metres deep at high water, although it does mean fewer rocks to walk over! We were able to drive past a few hundred puffin twitchers waiting for the ferry to Skomer and park in a layby conveniently opposite the public conveniences! Five cars fit, which is lucky as we weren’t the first here, but we make sure to leave access for another vehicle to get past down to the beach. [If this area isn’t free drop kit off and park at the National Trust carpark that you pass on the way in but it costs £5.]

Our first dive started at 09.00 on the left side of the bay. Care must be taken to submerge and fin out into the depth below the draft of the Skomer ferry before turning west to pick up the base of the cliff and heading north following the wall. We found plenty of life at 12 metres and continued to a depth of 22 metres before returning along the wall and navigating back through the middle of the bay. During the dive visibility was around 4 metres and we saw a good number of spotted catsharks, spider, velvet and edible crab, mermaids purses (cat shark eggs), lobster, king scallops and anemone. Martin’s Haven is a marine conservation area and strict penalties apply to those who remove sealife.

Dive 2 was to the left of the bay and we got into the water just after low water. Taking a bearing of a large rock in the corner of the bay we submerged travelling over kelp before reaching the mark and continuing to north east for the dive. This dive is made up of gullies and rocky outcrops and we saw much of the same marine life bar the anemone but did see some squat lobster.

Only me and Martin were up for a third dive so we decided to go back to the left side of the bay as he had stayed shallow on his first dive. The ferry had stopped for the afternoon so we surface swam before making a decent into deeper water. We were treated to two yellow-edged polycera (Martin had his SeaSearch book and submitted a form) – nudibranchs to you and me!

After diving I took the cylinders to be filled by a chap called Ivor the diver who the skipper put me in touch with as I couldn’t get hold of the previous guy who did fills. Although Ivor and his compressor are situated between the bunkhouse and Neyland he couldn’t do Nitrox at the weekend, even though it was only Friday!

That evening we were joined by Flash and it was a trip to Gordon Bennett’s chippy in Milford marina.

Day 2 saw us heading to Neyland marina to meet Jorge, who had stayed in his van, and skipper Len and the crew from Dive-in2-Pembrokeshire. Unfortunately quite a swell had developed out to sea and we couldn’t get out of the haven for risk of not being able to get back in after diving. We could have dived in the haven but the increasing southerly wind would have made it very lumpy with poor underwater conditions. As Sunday’s diving would be blown out we made a democratic-ish decision to go shore diving and headed to St Bride’s bay. Unfortunately lots of others had the same idea as this site is north facing, but we were all able to find room in the carpark which was free and has public toilets!

Looking out into the bay we could see the sea state was around a 3-4 so care had to be taken not to end up too close the rocks and being washed up onto them. Martin, Jorge, Ellie and I decided to go left out of the bay and the Mikes went right. Unfortunately Jorge had some fin donning issues so sat the dives out, but he didn’t miss much as the dive was a bit washing machine like and we were limited to exploring areas that were free from the risk of us being washed up.

For the second dive me and Martin decided to go right out of the bay as the conditions had improved and the tide had risen. We were followed by  the Mikes but again underwater conditions were shocking and the swell/current made navigation a nightmare. Giving up for the day it was back to the bunkhouse before going to the local and everyone’s favourite pub for dinner—the Taberna Inn, in Herbrandston.

Day 3 gave us some real foul weather; strong wind, heavy rain and dark. Shore diving sounded a bleak prospect so the option was back over the border (just) to NDAC of which four people chose to do this. Ellie, Martin, Jamie and I got kitted up and left our cylinders to be filled in torrential rain however by the time we got in the water it had virtually stopped. Having never dived NDAC before I was treated to an array of new underwater attractions (military vehicles, planes, double deckers plus more) and best of all visibility of up to 10 metres! After two dives it was already closing time, so it was back home and hanging the kit out to dry ready for our next outing. 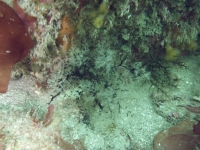 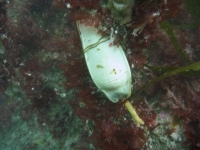 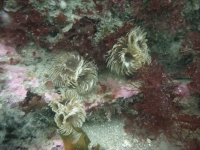 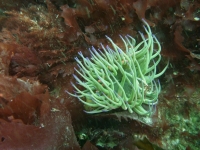 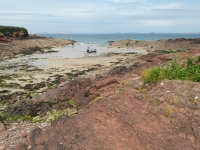 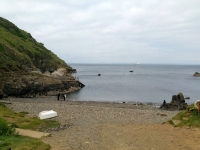