Skip to content
A mix of weather leas to some interesting dives off Plymouth.

On the 16th July, four diving members set off for Plymouth. Martin, Steve, and Hugh were joined by Garry who was already down there. We went on Sunday afternoon to avoid an early tiring journey on Monday morning before diving. This was good for settling in and acclimatising to the area. We stayed at the Boringdon Arms in Turnchapel, not far from the In-Deep Dive Centre at Mount Batten. As it turns out the pub was comfortable with B&B and evening meals, and very adequate.

Now I’ve been diving for 30 years but never out of Plymouth so I was very excited…a first for me.

On Monday morning we checked into the dive centre at 9am to learn that our first dive was at the Eddystone Lighthouse from dive boat ‘Seeker’. This is the fourth version of the lighthouse, 49m high and marks the dangerous to shipping rock outcrop underneath. On one side it levels out at about a sandy 20m but we dived on the East which drops to 40m. But we didn’t go that deep and most of us stayed between 25m and 30m for 43 to 55 mins on Nitrox 32 (or air). My dive log reports 7m viz and the lovely multi-coloured jewel anemones smothering the rocks. Also, lots of dead men’s fingers, sea urchins and large anemones probably Urticina type. Big and fat like me!

After a cup of tea and delicious pastie, our second dive was on the Scylla, an ex-Royal Navy frigate cleaned up and sunk for divers in 2004. Max depth was about 25m but she was interesting because of all the swim throughs, fish life, corals and anemones which had colonised it since. A very memorable dive with about 8m viz.

To think that I had done two iconic dives on my first day here was just amazing.

First dive was the Persier. Another iconic dive but deeper at 30m and viz 8m. The shot line was on the two huge boilers with conger eels and a small crawfish* (now there’s a rarity). On the dive we saw a large shoal of pollack under the propeller area and on the superstructure flat plates with fields of large and small pink sea fans. Almost a nursery. Unfortunately one of the divers from the other group on the boat suffered a DCI on this dive and we had to put to port to a waiting ambulance to go to the DDRC for recompression treatment, but he was not seriously ill.

Our second dive after the tea and pasties was the Glen Strathallan, a large pleasure yacht. Very flat except for the boiler but we saw another baby crawfish* hiding in a boiler tube, several cuttlefish and a lobster. Very few crabs in this area…perhaps the locals ate them all? [They just saw you coming – Ed.]

Today we were joined by Rob to make our numbers up to five. Our first dive was the James Eagan Layne, an American Liberty ship which was torpedoed in 1945. It’s another iconic dive and popular with a depth of about 20m with the shotted bow only about 8m below the surface. There are five holds to swim though but the roof sections had long collapsed so there was plenty of light. We saw two lobsters, dead men’s fingers down the sides of the hull and some big ballan wrasse. Also cuckoo wrasse and a few small crabs. The shot line ascent was perfect for the three minute safety stop.

The weather had deteriorated on our ascent so the second dive was re-scheduled to Tinker Shoal, a navy dumping ground for returning expeditions. Lots of broken pottery, a discarded or lost shot weight-belt and we followed a fisherman’s pot line for a while and guess what…some crabs in them. Snakelocks anemones with Leach’s spider crabs hiding in many of them, cuttlefish and even a ships bathroom tile. Maybe discard to the ship but treasure trove to us divers

With the weather improved on land we set off with several potential dive sites in mind, depending on the state of the sea, these being the wreck of the Elk or Rosehill. However about half a mile from the site the skipper decided the conditions were too bad so we went for Le Poulmic instead. The Poulmic is a French vessel seized by Royal Navy after the collapse of French forces during WW2 which was converted into a mine sweeper and ironically sank after hitting a mine in October 1940. This 40m-long wreck now sits between 15 and 22 metres deep although my max depth was 16.8 meters. There is not much left of the wreck the largest part being the engine bed.

We descended the shot laid by the boat but this was a little off and it took us a few minutes to find the wreck with the viz being around 2-4m. We spent a short time swimming around the wreck and then headed off to explore the nearby reef where we drifted, saw a small amount of aquatic life before ascending on a DSMB for a total dive time of 52 minutes.

The second dive of the day was at Pier Cellars, a reef located on the west coast of Plymouth Sound south of the breakwater. This area is also used by the dive schools for teaching. Descent via a boat-laid shot before we headed east for a short time until finding the reef, then following it in a northerly direction. We found this dive very interesting and thoroughly enjoyable due the amount of sea life on and around the reef. Species we encountered were large spider crabs, blennies, cuttlefish (one of which we spent some time looking at and photographing) and some scallops. Like Tinker Shoal this site also had been used as a dumping ground in the past so some scavenging was available. We came up with a DSMB for a dive time of 55 minutes and a max depth of 15.5 metres.

The final day’s diving was never expected to be up to much due to the poor weather and sea conditions (see In Deep’s Facebook page for some pictures of the day). Due to most of the divers dropping out including Garry and Hugh there was only myself, Martin, Steve and another chap left on the boat. It is also worth mentioning at this point that the kids from the diving school braved the weather!

The only available dive site to us was the Breakwater Fort, an old commercial divers’ training site with lots of metalwork on site. We descended by the wall of the fort as instructed by the skipper and once reaching the bottom of this started looking for a rope which lead to the more interesting items. However, after looking in very poor viz and following several short ropes we failed to find the correct one. After continuing to dive by torch light we saw a few fish, a crab and some sea fans and tower shells, but not much more and came to the surface back up the wall after circumnavigating the fort twice for a total dive time of 48 minutes and max depth of 12.2 metres.

Our only option for the second dive was to repeat the fort. As the underwater conditions were so poor and the waves were clearing the breakwater we decided to call it a day and head off home early.

*Crawfish were recorded and forms submitted to Seasearch. 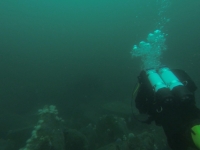 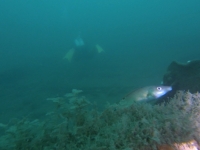 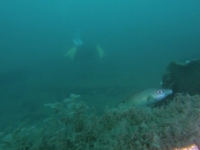 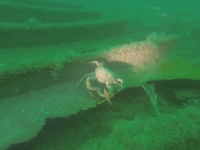 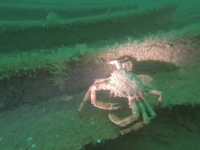 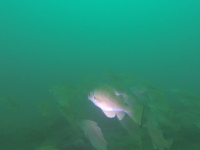 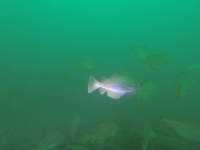 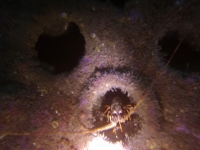 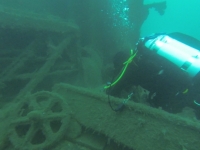 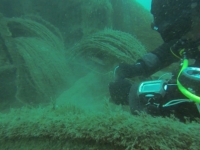 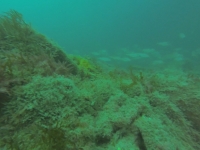 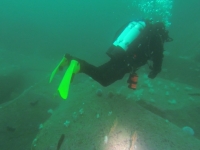 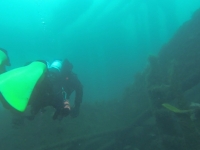 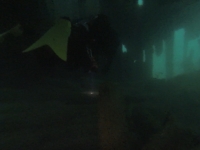 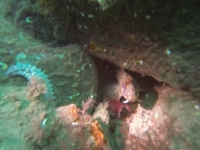 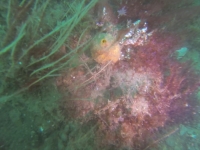 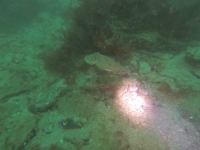 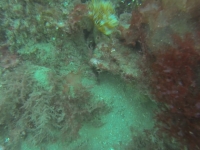 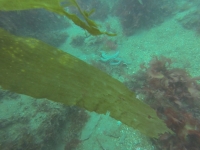 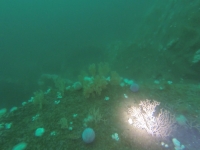 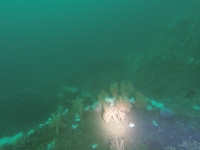 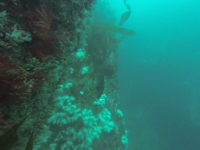 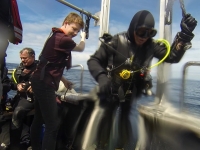 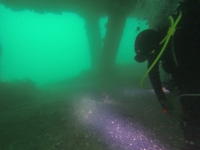 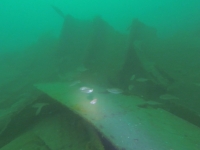 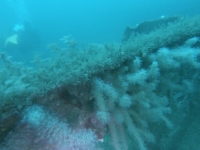