We set off for the long drive on Sunday afternoon, the trip to Eyemouth is over five hours but with not too much traffic and most of us travelling in pairs it wasn’t too bad. On arrival we dropped our bags into the accommodation (three of us would be staying up the road at alternative accommodation due to repairs being required at the Home Arms) grabbed some fish and chips from across the road and headed to the pub for a drink.

We boarded the boat after a proper full English breakfast for a gentle start to the the week’s diving. The first dive was a dip in Anemone Gullies, the name kind of gives it away but the sheer scale of the gullies and the amount of sea life made this a truly magical start to the week’s diving. Straight from the drop off the boat we descended onto a huge patch of brittle stars. From there everywhere we explored returned more lobsters, crabs and anemones.

Due to the weather not being the best (but still more than diveable) our second dive was at West Hurker. It was here that Jamie dropped in on an octopus enjoying its dinner. Taking every opportunity, the octopus had found an lobster trapped in a lobster pot and decided that it was an easy way to catch a meal. After this I was determined to find an octopus somewhere out here.

We returned to harbour and headed back to our rooms to shower and then off for something to eat. The pub from the first night, The Contented Sole, had a good menu so we had booked in there. I think we nearly finished off all the steak pies that night as nearly everyone ordered one. Luckily they got some more in as Garry ordered the same thing for the next two nights (no, swapping chips for potatoes does not make it different!).

Day two of diving and one of the few wrecks in the area, the SS Shadwan, was our first dive of the day. We managed to make it through day one with no drama but it wasn’t to last. Barely off the boat and one one of the group lost a fin (back to eBay you go Martin), luckily skipper Gary had a spare set on the boat. The wreck, mostly flattened now by the sea, is a collection of large plates and bulkier items that have survived the years. A small current was running so we swam into it until we reached a large winch at which point we turned around the enjoyed the ride as the current pushed us slowly back to where we entered. Some small life hiding around the plates but no wild Force fins!

Dive two was a scenic dive around Weasel Loch and Conger Reef. Lobsters, crabs, various starfish and more. Didn’t see any congers but then again I didn’t see any weasels either!

Back to harbour for shower, food and plenty of putting the diving world to rights in the pub.

The first dive this morning was a scenic dive but with an exciting twist. The start to the dive is through Tyes Tunnel. It is a short swim through which opens out into a large cavern. It was a nice way to start a scenic dive amongst the towering boulders and walls covered in dead men’s fingers and soft corals. We nipped back into harbour after the first dive to pick up two more divers joining us for the next couple of days.

The second dive of the day was into Skellie Hole. The dive took us on a quick tour around the walls of the cove and then back out to follow the walls of the coast. Looking around rocks and gullies there were too many lobsters to keep pointing them out along with an array of small sea life.

We stayed out for a third dive today at Thrummie Carr. We dropped down a rocky outcrop and followed it down to the sand of the sea bed looking for angler fish. Not found one yet this week and still not found any octopus. Hugh and I set off hunting amongst the rocks but after 40 minutes found ourselves getting lost in a sea of kelp. Taking into account the dive time and deco limits we decided to call the dive a bit early make our way back to the boat.

The weather was still a little blowy today so we didn’t venture too far from the shoreline again. The land was sheltering us from the westerly breezes but it meant we wouldn’t be going up to The Isle of May. Instead we took a trip a little North of Eyemouth to dive under Fast Castle. We dropped down next to a large rock outcrop and followed it down. As we started to feel the current Garry and I turned Westwards to follow the coast South. We soon came to a vertical cliff of the coastline and had to turn West again. It was here that Garry pointed out the broken kelp lying at the entrance to a high sided gully. I gathered it was going to be a bit of a drift…

Drifting through the gully we stopped and held on to observe the extra life that feeds on the faster following current. Three lobsters arguing over a prime hunting hole, squat lobsters hiding in all the smaller holes, plus prawns, hermit crabs and juvenile fish picking at anything in the water. It was here when we stopped to look at large lobster that I spotted an Angler fish resting in the gully floor. Hanging on in the current and waving at Garry he wondered why I was signalling him to check his contents gauge when he had loads of air left all whilst sitting 2ft above the anglerfish hidden in the sand. Luckily he understood my poor sign language skills before he would have landed on it.

The second dive of the day was at Leiger Buss (Four Pinnacles), a nice scenic dive I am sure as we didn’t have one bad dive all week, but obviously I personally didn’t find anything to make notes on as my log book only has the essential fields filled in. We were just being so spoilt with good diving that even great dive sites became average in comparison. Viz all week has been consistently 10m or more.

The third dive of the day was in Weasel Loch. This was the second time we had dived here this week and if asked I would have happily dived it all the next day too. By this point I had grown so accustomed to the amazing scenery that it needed something special to really make me stop and appreciate the experience. For me Weasel Loch did that on this dive. The sunlight was streaming through the seaweed above casting ripples through the water as I hung motionless between the walls of a gully that towered above me like high rise building covered in bright white corals. There was nothing to do but stop and watch as shoals of pollock moved in the distance. It was only for a moment but it was brilliant.

Back on land, cleaned up and somewhere else for dinner tonight. Thursday night was pizza and quiz night at Oblo. Glad to say the team was consistent in the quiz managing to equal last years placing of second to last, even if we did have to leave early for an earlier start tomorrow.

Up early today as we planned to dive the Glanmire. A bit of a change of pace on the boat too compared to the leisurely pace we had been enjoying all week. Everyone hurried themselves to get ready for slack tide, well nearly everyone (looking at you Flash). Hugh and I dropped down the shot and broke off to first tour around the boilers (I read that later as my knowledge of boats starts at the pointy end and ends at the flat bit at the back) and the engine block in clockwise direction. Just passing the engine block I spotted a huge jewelled anemone down between two broken plates. I dropped lower to take a look and quickly realised I was being watched by a wolf fish into who’s home I had just stuck my face. Happy with our find Hugh and I headed back to the shot conscious of our air remaining, sitting on the shot line we could still see the bottom some 18m below. Not a bad way to do my 30 depth progression.

The second dive of the day and the last of the holiday was at Wuddy Rocks. Instructions from skipper Gary were to follow the rocks out to the East and look for a swim through between the last two rocks. Number of people who found the swim through, zero! Number of people who found the swim though from the opposite side, two! Hugh and I managed to circumnavigate and by sheer luck (or Hugh’s great navigating) find the swim through on our way back. That would have been the highlight of the dive if we hadn’t also managed to find an Octopus on our way around too! It’s amazing how far underwater sound can actually travel even shouting through a reg.

As if two great dives wasn’t enough to finish the week on our way home a pod of dolphins decided to have some fun and race out boat. Jumping and doing flips through the water in front of the boat I don’t know who was having more fun, us or the dolphins. An absolutely excellent way to end the week.

We returned to harbour, loaded our gear and headed for the fish and chip shop to fuel up for the long journey home. 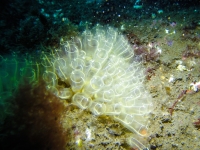 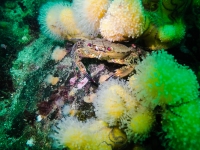 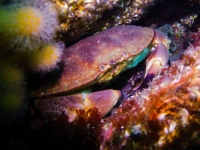 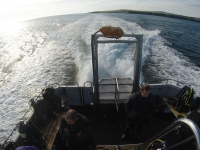 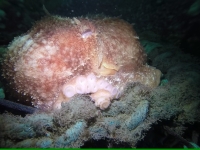 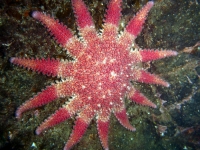 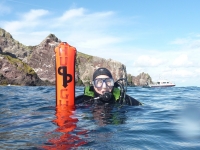 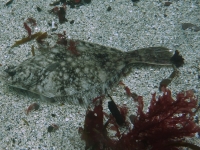 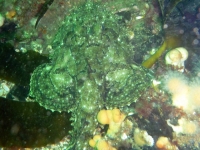 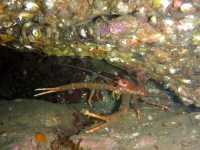 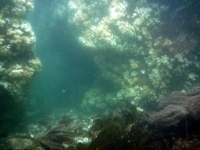 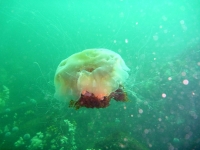 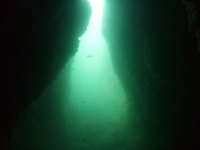 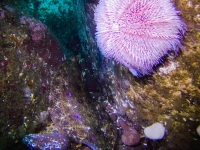 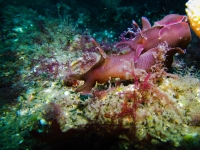 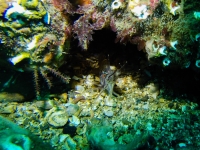 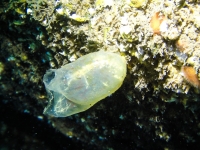 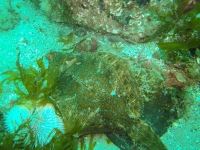 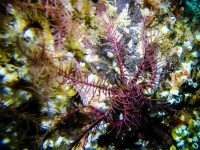 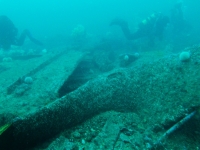